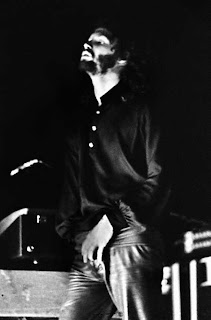 Wow! That's what I call a LIVE show, baby.

By all accounts, the performance 37 years ago today was forgettable -- a lousy concert, some called it. Except for Morrison's stage antics. The long-haired and bearded Morrison, then 25, exposed himself, briefly rolling down his beltless leather pants and simulating masturbation before a raucous crowd of fans -- or so the authorities alleged. Morrison followers, along with fans at the infamous Miami concert, say the rock star did nothing illegal. ''Nowadays, we would call it a wardrobe malfunction,'' said Donald Bierman, 65, one of Morrison's two Miami attorneys, who assisted the singer's Beverly Hills lawyer, Max Fink. Bierman's theory: ``I think he feigned exposing himself.'' Miami police charged Morrison with indecent exposure and other related offenses, setting in motion a legal battle that pitted prosecutors from a then conservative Southern city with a hard-partying rock icon at the peak of his success.

Neither Morrison nor Miami would ever be the same.

The Doors concert on March 1, 1969, had been highly anticipated by local teens, but The Miami Herald mentioned it only in passing. Tickets were $6 in advance, $7 at the door. The band expected to play for 6,000 people for a $25,000 fee. But promoter Kenneth Collier, who ran Thee Image concert hall in Miami Beach, oversold the event, Morrison's camp claimed. Collier, who has since died, publicly blamed Morrison. At showtime, 10,600 kids jammed the hall; thousands more milled about outside. Morrison was late after missing a Los Angeles-to-Miami flight. He began drinking, recalled the band's then-manager William Siddons in a telephone interview from California.
''Jim was always drunk; that was nothing unusual,'' said Siddons, who accompanied Morrison to Miami.
It was supposed to be a homecoming of sorts for Morrison. Born in Melbourne, the son of an admiral, he attended St. Petersburg Junior College and Florida State University before heading west to launch his poet-as-rock-star career. Things unraveled quickly on stage. Morrison started and stopped in mid song. He peppered the crowd with questions, obscene requests and four-letter words. He called for a revolution among the spectators. The audience grew angry, hurling insults. Morrison finally asked: ``Do you want to see my c---?''

Miami Beach teen David LeVine, now 56, was at the foot of the stage with his camera. ''I had come expecting to shoot a baby-faced Morrison and was disappointed to find he had a bushy beard and you could hardly tell it was him,'' he said. One of LeVine's pictures, later presented in court, showed Morrison with his hand near the crotch of his pants. ''Never saw him expose himself, though,'' LeVine said. Not true, said Theodore Jendry, 59, one of 30 off-duty Miami officers at the concert. ''He pulled out his business and started whirling it,'' said the retired Jendry, of Deerfield Beach. ``He should have been arrested right there.'' Siddons, the band's manager, said Morrison knew he had gone too far. On the limo ride back to a Miami Beach hotel, Siddons remembered Morrison telling him: ```Uh, oh, I might have exposed myself out there.'' ''He didn't do it for prurient reasons. It was theater,'' Siddons said. ``But it happened in Florida, a real black and white state, and it was the South.'' Following the concert, Morrison and his band went on vacation to Jamaica. Meanwhile, the backlash against him in Miami picked up steam. Radio stations briefly stopped playing, Light My Fire, Hello, I Love You and Touch Me. Then came the decency rally at the Orange Bowl. Backed by the Archdiocese of Miami, local teens organized the event and drew 30,000 people. Among them: singer and Florida native Anita Bryant. Even President Richard Nixon called to congratulate the organizers. Four days after the concert, six warrants on obscenity charges were issued for Morrison, who eventually surrendered to the FBI in Los Angeles.

Morrison's trial ran from mid-August to late September. The year: 1970. The place: the Metro Justice Building. Fans packed the courtroom. Morrison was defended by Fink, who has since died, and local attorneys Robert Josefsberg and Bierman. The prosecution team, led by Assistant State Attorney Terry McWilliams, had three future judges: Ellen Morphonios, Alfonso Sepe and Leonard Rivkind. Now retired, Rivkind, 79, recalled the state had a solid case. ''We had a number of witnesses who testified they saw him do it,'' he said. But at least one concertgoer, a prosecution witness, has changed his story. Karl Huffstutlear, 56, then 19, was among a handful of witnesses who testified that Morrison exposed himself. Reached by The Miami Herald at his Lake Placid, Fla., home, Huffstutlear said: ''I didn't see anything come out of his drawers. To me, it's still a mystery what happened.'' Huffstutlear, a retired Fort Lauderdale electrician, went to the concert with his then fiancée, now ex-wife, Colleen Clary, whose brother-in-law was one of the off-duty officers. Clary tearfully testified that Morrison exposed himself. She could not be reached for comment. Morrison took the stand, but didn't help his defense with his sassy attitude.

Witness the exchange between Morrison and prosecutor McWilliams. McWilliams asked if the singer wore skintight, tailor-made ''cowhide'' pants to ``give maximum exposure of your genital area? . . . Yes or no?''
Morrison: ``No. ''McWilliams: ``Isn't it a fact you were bumping into your instruments [because you were drunk on stage]?'' Morrison: ``I don't play an instrument. I don't even get near them.'' McWilliams: ``Your singing that night, wasn't it off?'' Morrison: ``I'm sure that you are aware that that is just a matter of opinion.''

The jury convicted Morrison of only two misdemeanors: indecent exposure and open profanity, and acquitted him of a more serious felony charge and other misdemeanors. ''He wouldn't be convicted today or even charged,'' said attorney Josefsberg, now 67. ``You hear worse language today in rap songs.'' At a sentencing hearing Oct. 30, 1970, Circuit Judge Murray Goodman told the singer his acts amounted to ''utter contempt for our institutions and heritage.''

The punishment: six months in jail and a $500 fine. ''Jail -- that's a bad place,'' Morrison told reporters outside the courtroom. Morrison appealed and was released on $50,000 bond.

But the conviction proved a fatal blow to Morrison and his band. Promoters shunned them, fearing more X-rated stage antics. The band stayed in the studio, performing just one last concert in New Orleans.

Morrison moved to Europe -- to reinvent himself as a poet. On July 3, 1971 -- less than a year after the Miami trial -- he was found dead in a bathtub in a Paris apartment, the victim of an apparent heart attack. His Miami conviction was still under appeal. For Siddons, who still manages rock bands, the Doors appearance in Miami represented a sad chapter in its storied rise to the top of the music industry. ''The Miami concert was pretty much the end of the Doors as we knew them,'' he said.

Ola, what's up amigos? :)
In first steps it is really good if someone supports you, so hope to meet friendly and helpful people here. Let me know if I can help you.
Thanks and good luck everyone! ;)