A Portrait of these Cuban times (2) 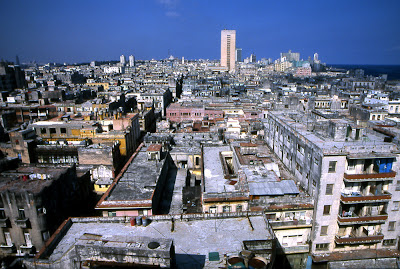 During the mid 80’s, the steady (and costly) support of the former Soviet Union allowed Cubans to buy at non-rationed stores and provided them with the kind of abundance that had not been seen in the island since the pre-Castro era. Longina describes it: A red curtain of wealth had fallen over the island. Soviet TV sets, German typewriters, Chinese blouses, Bulgarian perfumes, and Vietnamese sandals appeared in the stores that belonged to the so-called parallel market. Waiting lines were shorter there and clerks more courteous than in carded shops. We didn’t need coupons, though the parallel-market merchandise was quite expensive. But such abundance is not destined to last.

The “special period,” that begins shortly before the 90’s, puts an end to the parallel market and inflates waiting lines again. And yet, the first hints of the upcoming crisis are hardly noticed: That night Ma mère turned on the radio to the Voice of America as a posthumous tribute to her father. The most important news was that Lithuania had declared its independence from Moscow. It had something to do with perestroika, I suspected. But none of us imagined the impact that the disintegration of the Soviet Union would have on Cuba, though we were 9550 kilometers away from it. As the crisis deepens and the American dollar becomes king, Longina, like everybody else, suffers the inevitable consequences. The sheltered life she has enjoyed up to that moment becomes a thing of the past, like European perfumes and pretty sandals. A parallelism is established between the collapse of communism in Europe and the breakdown of her family life. A particularly relevant chapter is the one devoted to La Lenin, an elite boarding school that Longina starts attending reluctantly. However, it will contribute to open her eyes to the changes that are taking place in her country and the world. It was also at La Lenin where I heard, for the first time, unveiled criticism of the system and even of You-know-who. My classmates didn’t just whisper about “this.” They used familiarly the first names of our leaders, criticized them and discussed the possibility of a revolt in Cuba, an aftereffect of the movement that had changed the European map. “Would Raúl order the troops to fire on the crowds as Ceausescu did in Romania?” Miroslava asked once. “I don’t doubt it,” Lisaveta answered. “Raúl is a coward, always hiding behind his brother’s shadow.” The heirs of the high-ranking Communist Party members have had the opportunity to travel abroad and see a different world. Many have witnessed the start of perestroika and look forward to a similar movement in Cuba. Young and passionate Lisaveta, the daughter of a Prensa Latina journalist, becomes involved with the opposition group Movimiento Cristiano de Liberación, led by Oswaldo Payá. Longina, however, does not participate actively in the political scene. “[Lisaveta] was a daughter of perestroika and I, a ‘special period’ girl,” she acknowledges.

The 1994 Rafting Crisis, that followed a rioting in the Cuban capital, puts Longina at the crossroads. She must decide between staying and “bringing perestroika to Cuba” and looking for a better life at the Miami shores. She finally makes a decision and the novels closes with a crowd of desperate balseros wafting away as they pray for the blessings of a protective Afro-Cuban deity, Yemayá. This novel is a must read for those interested in today’s Cuban life. What you won’t find here, though, is the sordid portrayal of jineteras and chulos preying on guiltless foreigners, juicy sexual scenes or excrement-oozing depictions of Old Havana tenements. Prostitution shows its heavily made-up face in a few pages, but it is not a central topic of this fast-paced, well written and hope-inspiring novel. Margaret Duran, Ph. D. is a retired literature and English professor who currently resides in Albuquerque, New Mexico.
en 21:57