"We left with almost nothing" 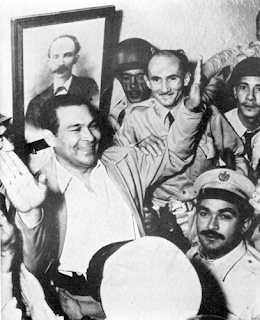 Nothing was prepared for our departure, as has been falaciously said by the euphoric "victors" -those vultures or crows cackling over pools of blood. In the Palacio, we left the suits, the dresses, the children's toys, the trophies won by the eldest at horse shows, the expensive gifts made to the children on their birthdays, pictures and works of art, jewels and ornaments of the First Lady, my personal possessions, acquired or presented to me from the 1930's on. Nothing was touched in "Kuquine," our private dwelling. My beloved library, where I spent the last hours before the decisive meeting, remained intact. Here were the tender books of my boyhood, those which recalled my adolescence, and those which were my teachers in my maturity; the encyclopedias, the hundreds of picture albums, the relics and keepsakes collected in the rooms which the "invaders," blind from ignorance, called "a storage bin in the form of a library." The stocks, bonds, securities, and cash which represented the basic fortune of the family and the wills which disposed of them in case of death were left in the banks.* Those suits and dresses, the jewels, the securities, and cash could have been transferred days before, as others did, or they could have been taken with me; for if I had been planning, not for days, but for hours, the end of my term as President, who could have prevented it? -- Cuba Betrayed, by Fulgencio Batista y Zaldívar (Vantage Press, 1962).
__________
* If the President's fortune was left in the banks, one wonders how, after 1959, Batista (and his family) could live a life of splendor in Spain and Portugal until his death in 1973.
en 8:36

"The masses follow more blindly as their hopes are hopelessly shattered".

In reality, most of all of us cuban exiles, regardless if you left the island in the 1960's flights (also via ships), or 70's Camarioca, or 1980's Mariel, or 1990's Balseros, LEFT WITH NOTHING. I personally remember at the age of 6, at the HJose Marti Airport, being searched, and having a stuffed animal bayonetted and confiscated (no it wasn't full of jewels or money) by a revolutionary police "miliciano", just to aggravate my parents, with hisrevolutionary smirck. Most probably he is living now in Miami. Batista left with a lot, including investments and property in Daytona. Very few cubans, which had property or business here, were able to transfer funds or get personal items out. The great mass of the midle class and others were robbed of heritage, home, and ALL BELONGINGS. The few pictures of my grandparents were mailed to my family via from cuba by my great uncle. So, guess what, el gordo con el medallon de oro que llega por lancha desde Cuba, o viene via Mexico, sale con mas que la gran parte de todo el exilio.
Cuantas maletas con billetes y oro se puede poner en una balsa?